Ok, so Joe said I had to write an article for the blog...so sure, let me put all my other responsibilities on hold and take on more work!  Well, to start off easily, I’ll let the first post be about my recent finds while picking through the shelves at the local Village of Value.

The sea of knick knacks were angry that day, this I can tell you.  The store was jammed with slow shuffling feet and the aisles were blocked with mismanaged shopping carts.  Pocket change was spilling over one of the cash registers and the parking lot had giant cars pointed in every direction.  It was... Senior’s day.

First to catch my eye was the video game shelf filled with the regular xbox and playstation overstock.  Among them was Tony Hawk’s Pro Skater 4 for the Nintendo Gamecube. 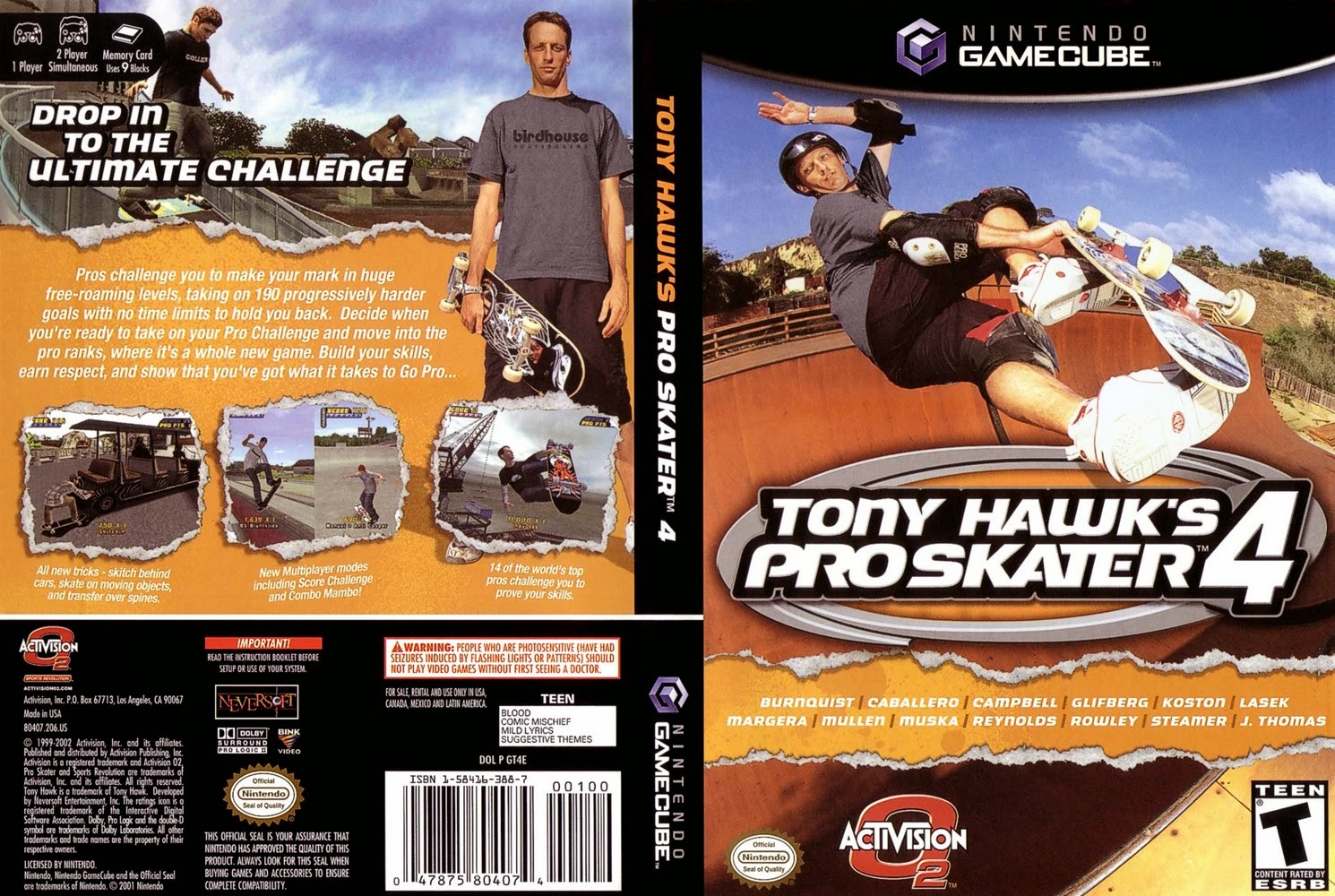 Although never a skateboard dude by any stretch, I knew this franchise was well
received and always given a high fun rating.  No manual, but the disc didn’t look too bad. Price $1.99.  No brainer.  Turns out game play is fun, you can jump right into it and start pulling off tricks easily enough. 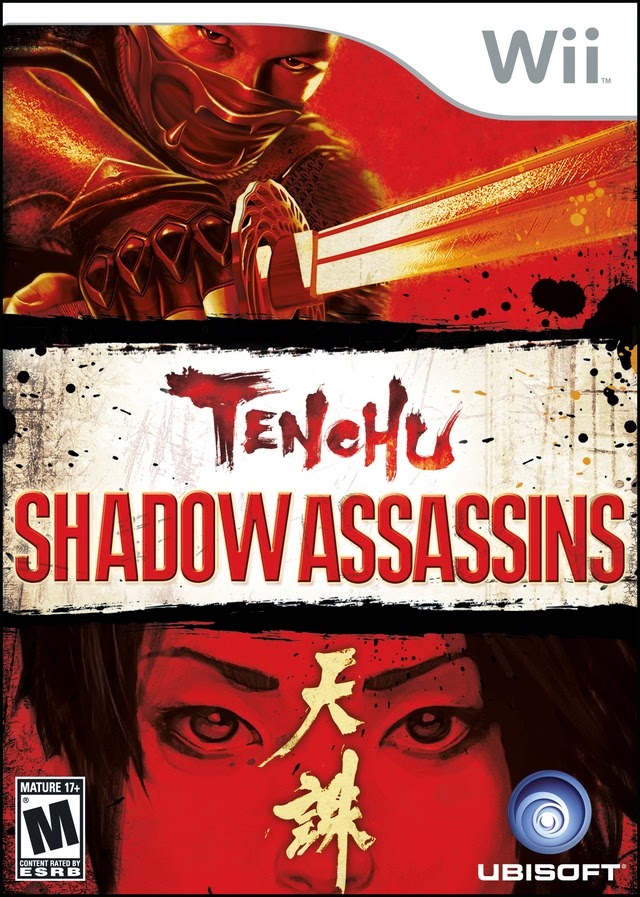 Also spotted a Wii game, Tenchu Shadow Assassins.  This game is pretty much Splinter Cell for ninjas.  I remember seeing this title quite a bit on reseller’s shelves, but reviews were never terrible on it.  Would it be worth it?  The box appeared very clean and even contained the original manual.  The disc was even super clean.  The price: $2.99.  That’s worth taking a chance on it!  I’ve actually given it a half hour of playtime so far and it actually seems pretty decent.  It is mostly sneaking around in the shadows for sneak up kills but you will face sword combat as well.  I did not fare well in this mode.  If you are to challenge a foe face to face the camera switches from third person to first person and you are to hold your wii controller to counter and attack with your sword.  The screen will indicate which way to hold your controller to block a sword swing, but it happens so fast any blocks I made were purely luck.  Maybe I’m missing something…

Next while looking through the miscelaneous baggies of small electronics (sometimes you’ll find a quality retro controller in these) I saw a bigger piece of black plastic behind some crappy point and shoot film camera.  There it was, a Poloroid Instant Land Camera complete with original manual.  Shocked, I actually said “Holy Shit,” out loud.  I quickly looked around to see if any of the old timers overheard and obviously they didn’t….because they can’t hear. 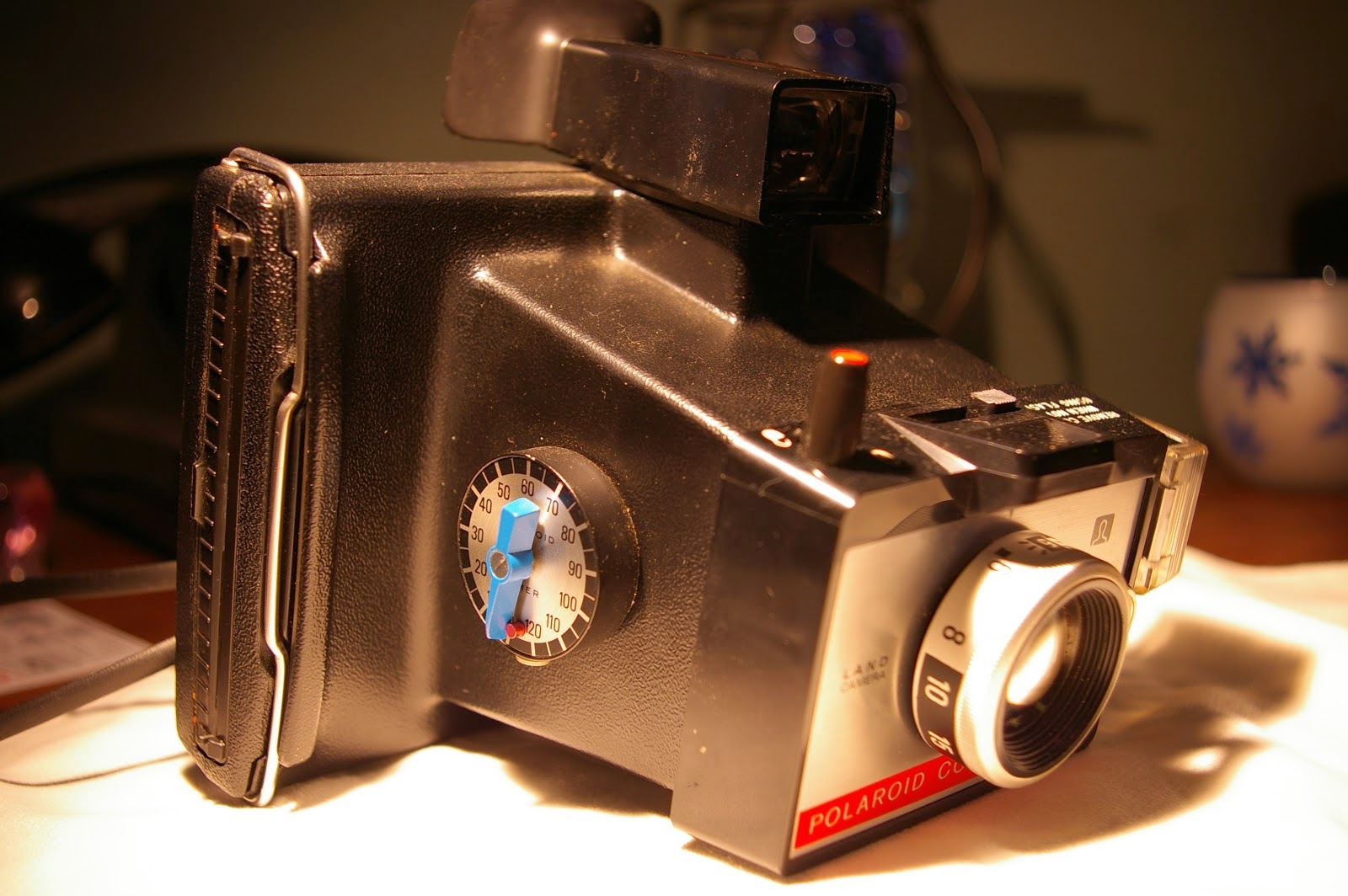 This model is the Colorpack 80, a rigid plastic body instant camera made in the UK between 1971 and 1976.  It featured manual focus from three feet to infinity, shutter powered by two AA batteries and a red square visible in the viewfinder so the shooter would know where to place the head while taking a portrait.  The timer seen on the side is used to make the user wait the appropriate amount of seconds before exposing the instant film.  You would pull the film out of the slot, wind the timer, then peel the picture out of the developer paper.  The instructions say to carefully fold up the leftover developer film, caring not to touch the chemicals left on the paper.  Seems perfectly safe.

The flash cube would be installed on this side, the plastic lens folding out.
Value Village price: $5.99 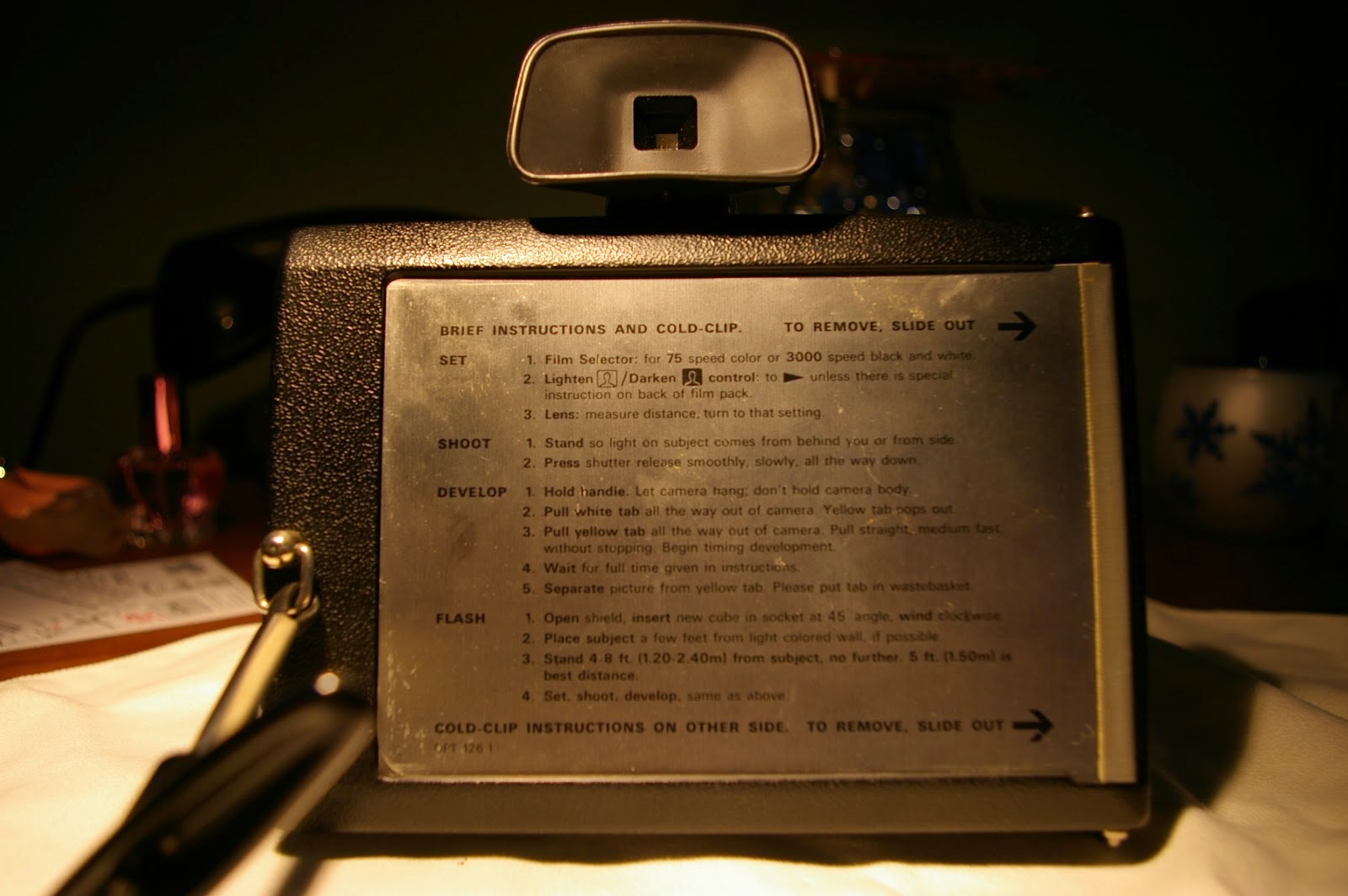 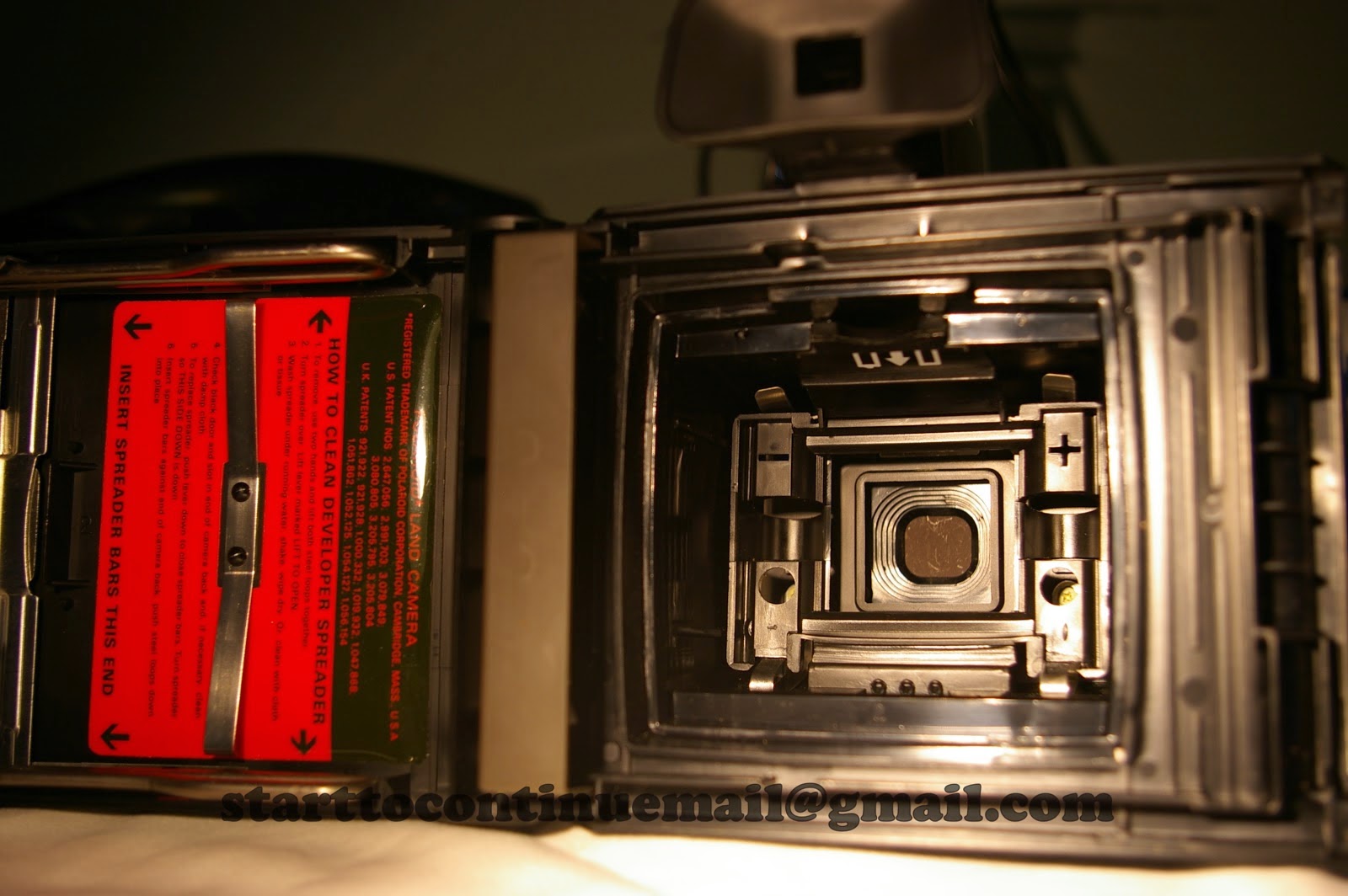 Now, resale value for these types of cameras is nothing you can get rich on by flipping but I think they are beauties and fit in well with my ever growing vintage camera collection.  Just look how good it looks beside my other Land Camera, the Big Swinger 3000.  I swear I bought that one just for it’s name! 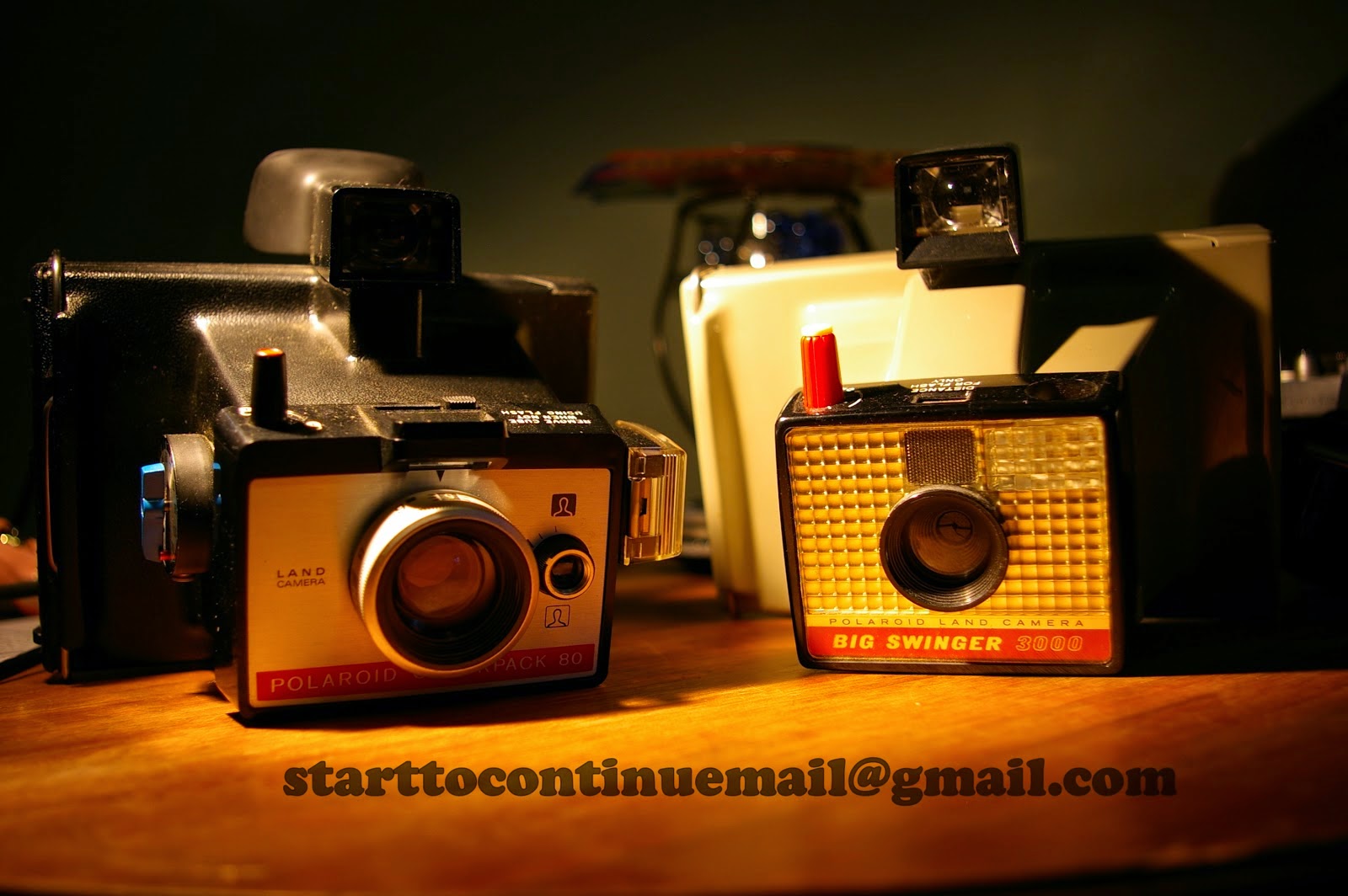 Moving down to the shelves, I noticed something else sitting on the endcap of an aisle.  A Pentax!  I’ve always shot on Pentax, and learnt photography using the workhorse of all oldschool photography students, the Pentax K1000.  What I was looking at now was the K1000’s daddy, the Asahi Pentax Spotmatic SP. 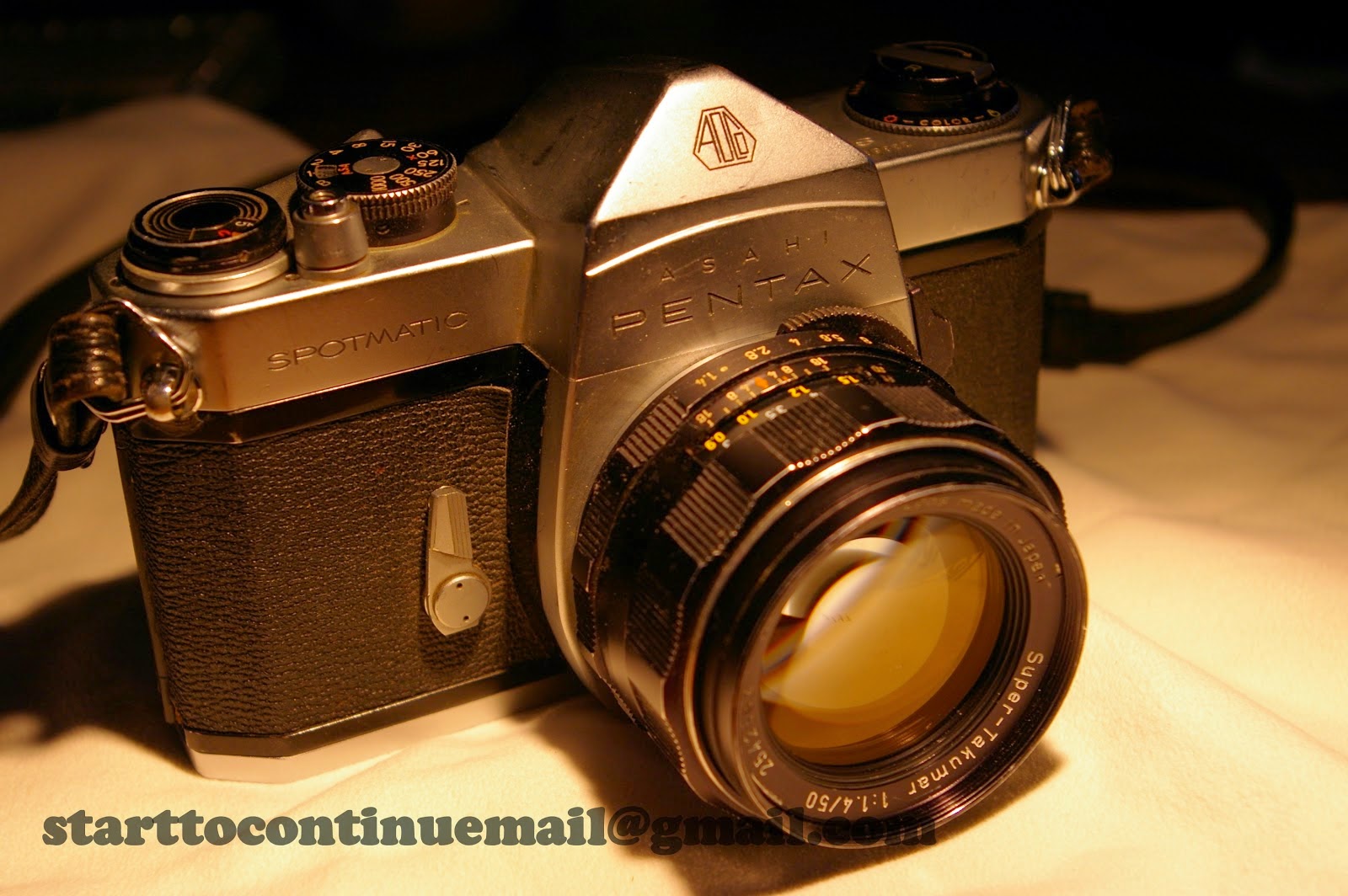 The Spotmatic was made between 1964 and 1976 in Japan and retailed between $250-$350. It was one of the first SLRs to feature Through The Lens metering and despite its name being Spotmatic did not use spot metering but used instead average metering.  The real revolutionary feature was the ability to focus with the aperture wide open, then flick a switch at the side of the lens that would stop down the lens and turn on the light meter inside the viewfinder.  By adjusting your exposure controls under the direction of the light meter you could be extremely confident in your shot turning out.  Here’s a shot of the switch. 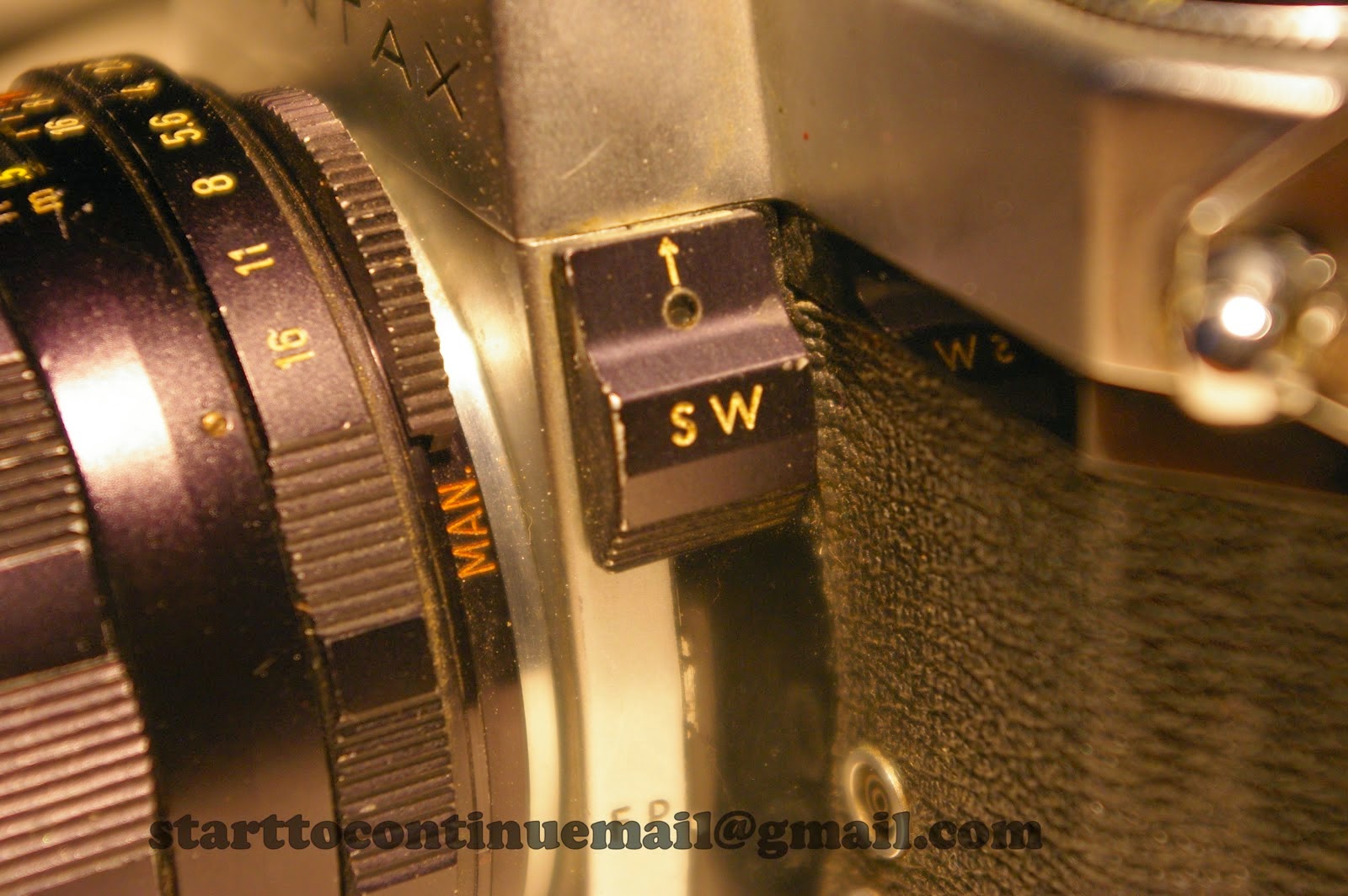 The light meter circuitry was powered by a 1.35 volt mercury battery. 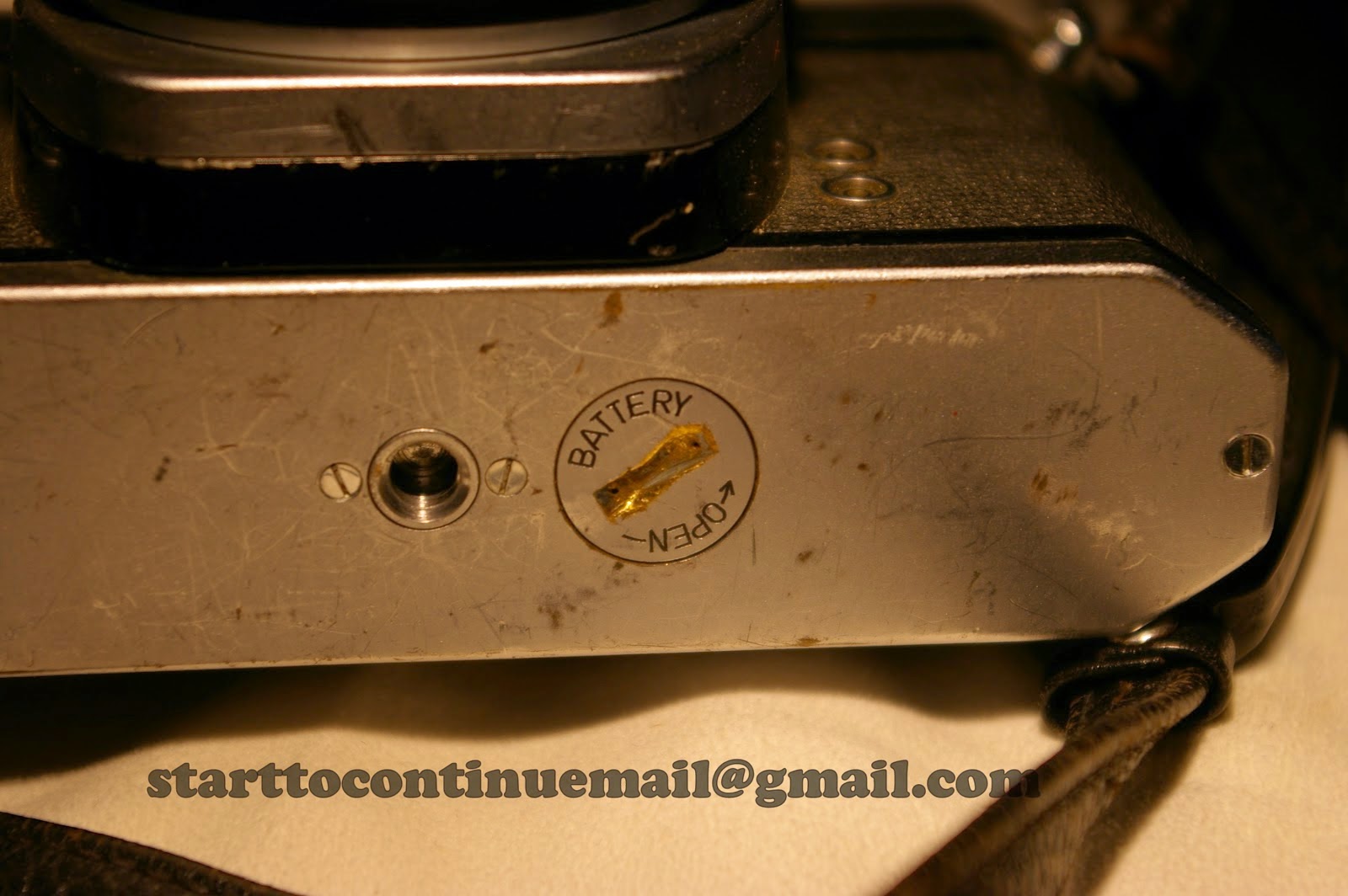 The Spotmatic was packaged with a very desirable lens on a screw mount.  The original lens is still on this one, although it has a mismatched lens cap.  While the Super-Takumar lens was known for it’s hard coated durability, you can see in the next few shots this glass has taken a hit or two in the last 50 years. 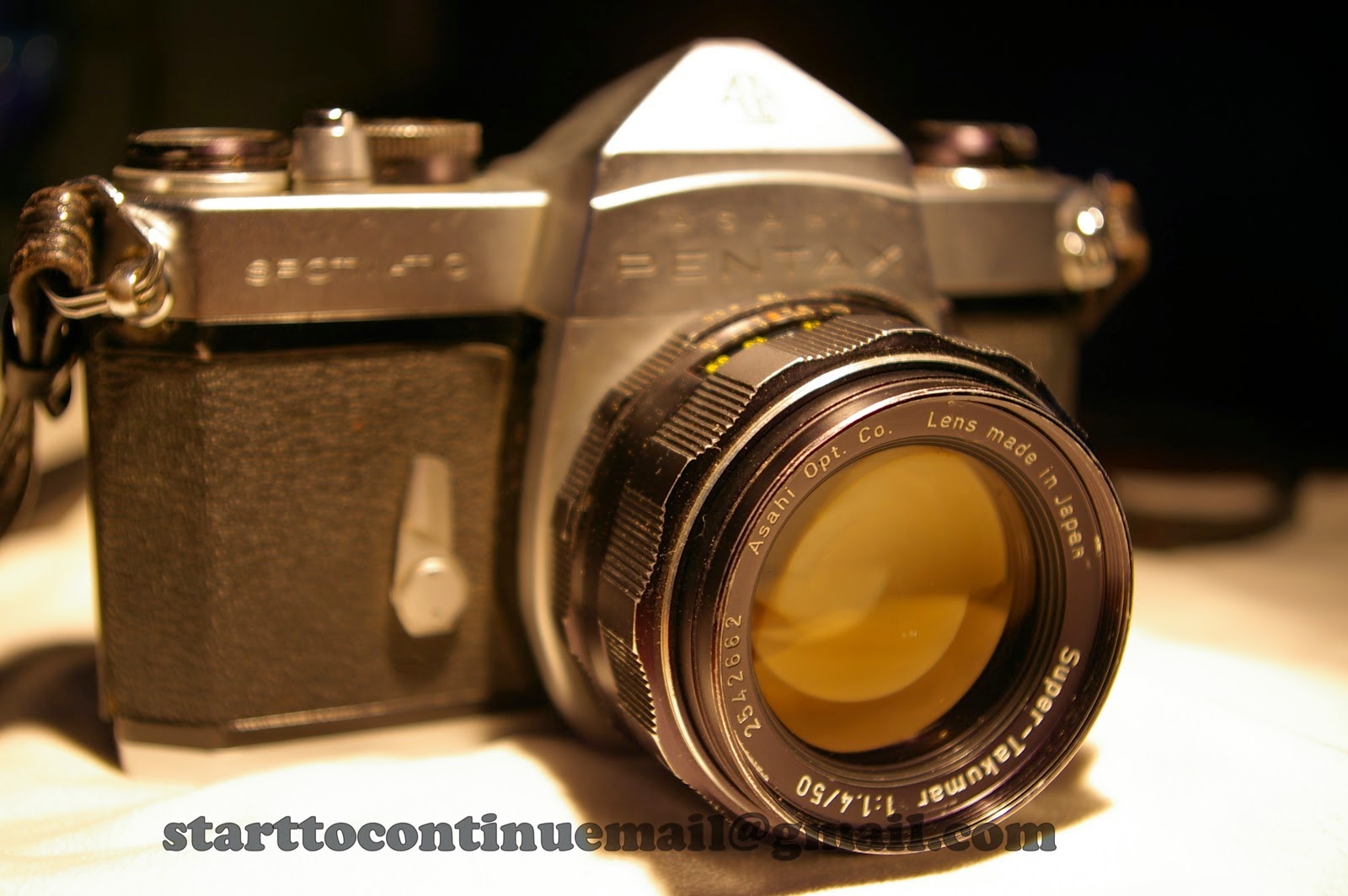 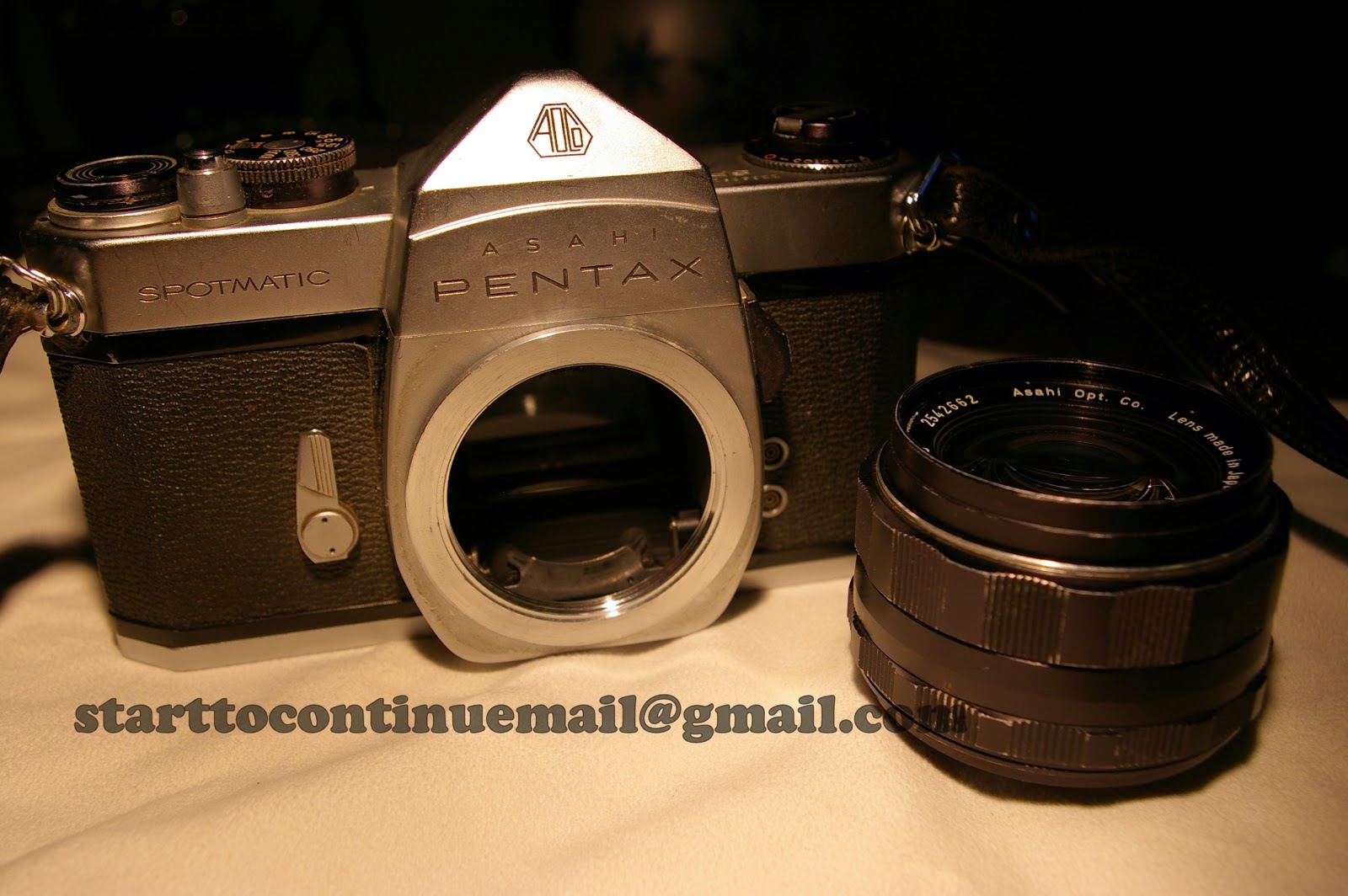 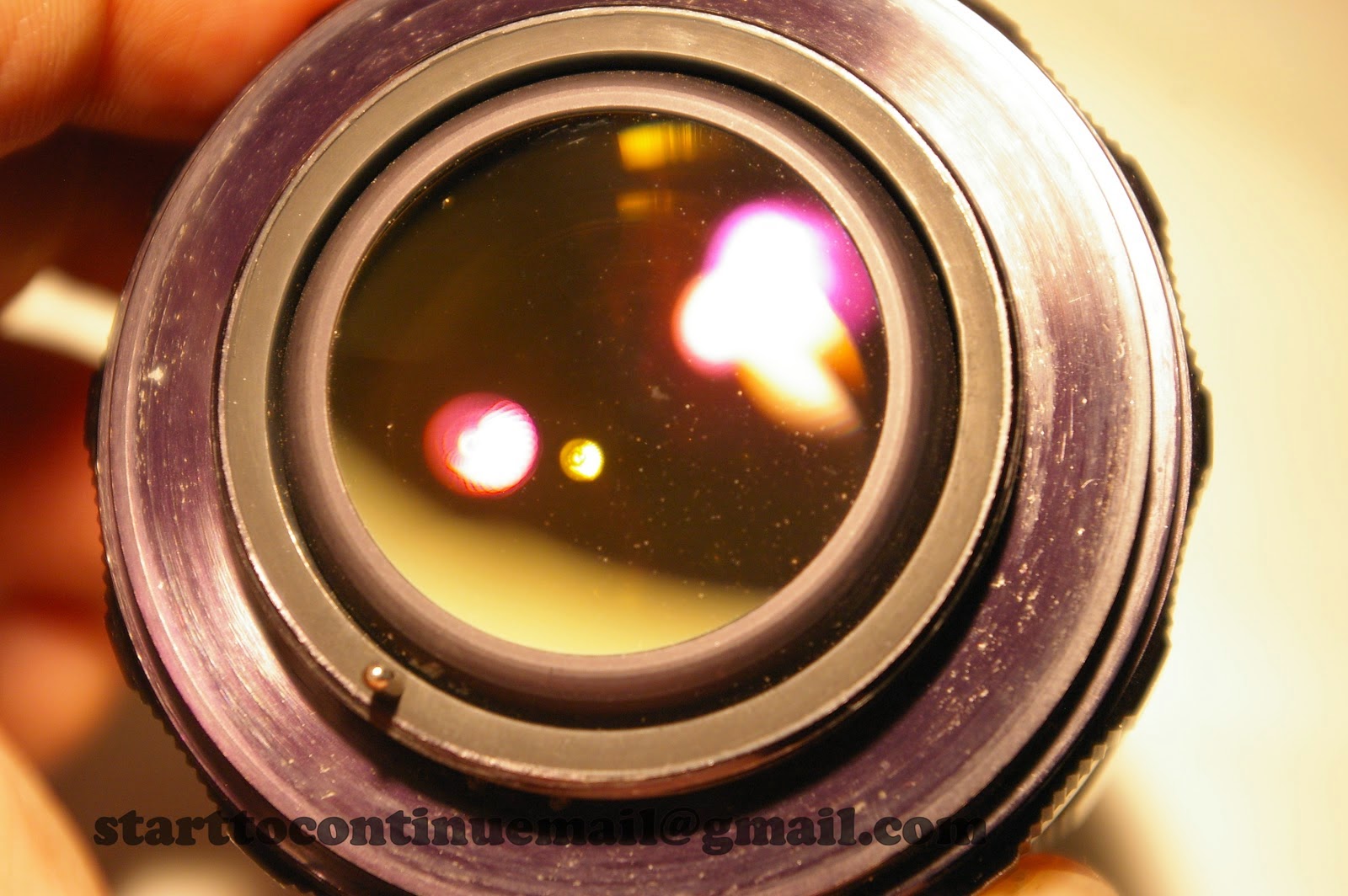 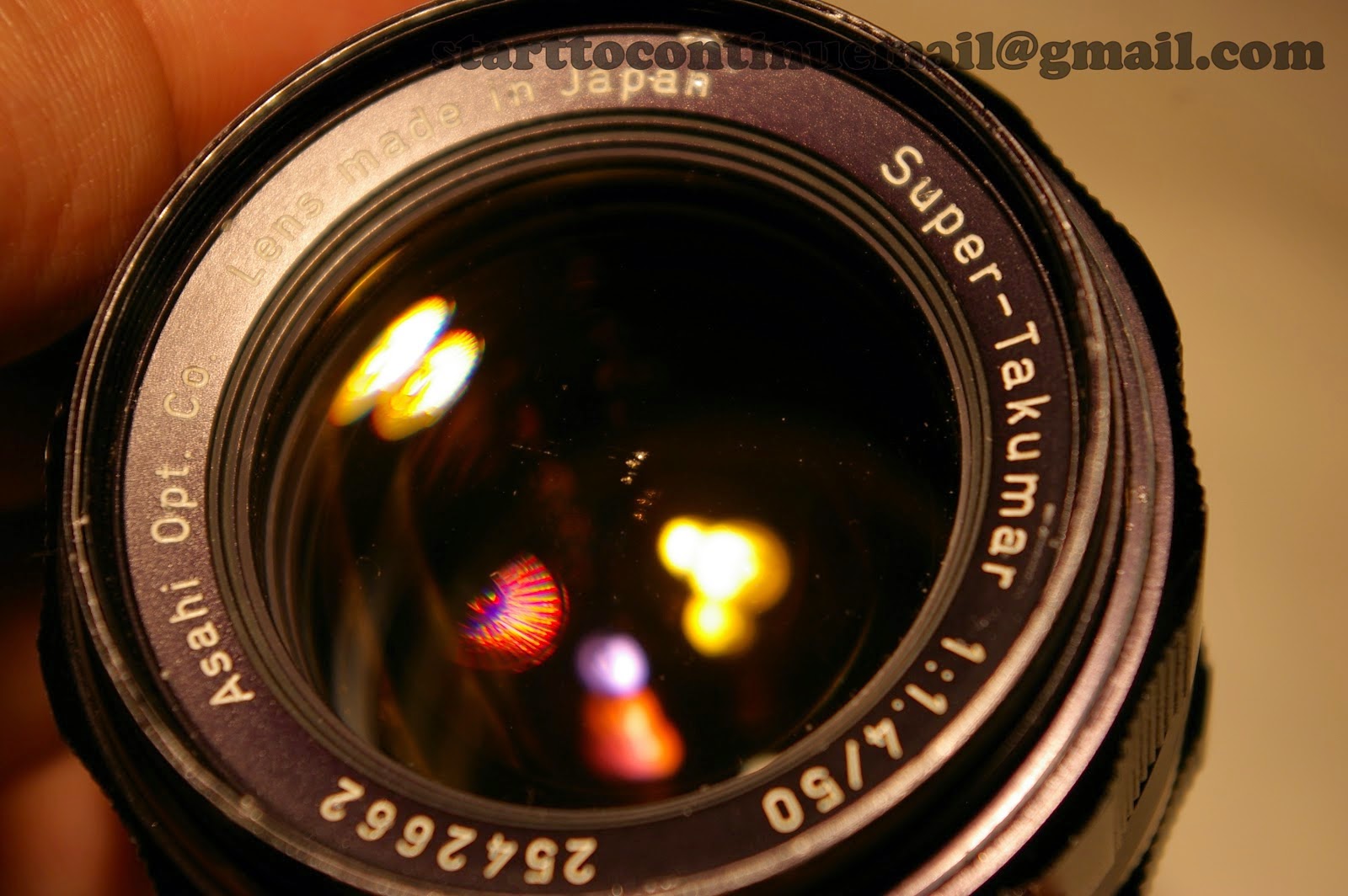 Overall, this camera is in great shape.  The steel has spots where the finish has been rubbed leaving wear marks, but no dents!  The mechanics all work well including the built in timer, but I have yet to replace the battery to see if the light meter works.  I did find some of the famous Pentax skin peeling back, but that should be an easy fix. 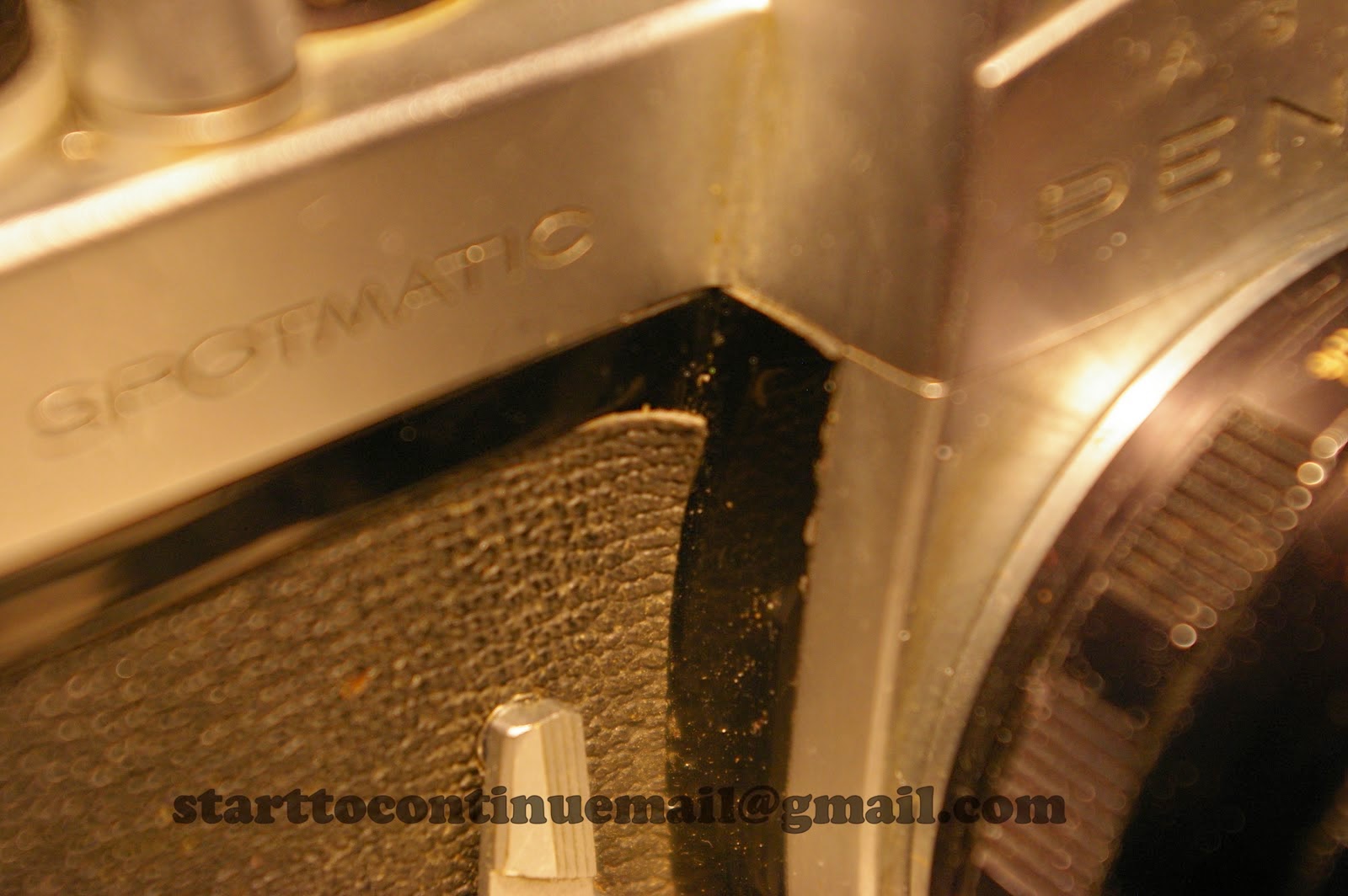 Again, today’s retail on flipping cameras isn’t crazy, they can go for up to $100.  Not bad for the Value Village price of $14.99.  Nonetheless it will fit in well in the collection, filling the hole left when I unfortunately sold off my  K1000 years ago.

So that is the tale of the Village of Value.  It was definitely a score as both of these cameras would normally be stashed in their glass showcase for an unreasonable price.  Most of the time, if their pricer sniffs out anything collectable they get put under the glass immediately.  They were asleep at the wheel that day and that made my day!

Stay tuned to the blog and the Youtube channel as I hope to bring you guys full looks at my various collections…..